Access to Justice for Women Victims of Violence in the Americas

Report: Access to Justice
for Women Victims of
Violence in the Americas

The norms of the inter-American system recognize as essential to have effective de jure and de facto access to judicial guarantees and protections in order to eradicate the problem of violence against women, and thus for the States to effectively meet their international obligations, freely incurred, to act with due diligence in response to this serious human rights problem. However, the work of the IACHR and the Office of the Rapporteur shows that women victims of violence frequently do not have access to adequate and effective judicial remedies when they report what they have suffered, with the result that most of these incidents go unpunished and women's rights go unprotected. The IACHR has observed that the vast majority of cases of violence against women are marked by impunity, which has the effect of perpetuating this grave human rights violation.

For these reasons, in 2005 the Office of the Rapporteur carried out a series of activities to gather information on the main achievements reached and the challenges women face in accessing justice when they are victims of violence and discrimination. These activities included subregional and regional meetings of experts, as well as the circulation of questionnaires to the States on these matters. (Click here to obtain more information on the meetings of experts and to read the questionnaires)

Photos of the meeting of experts in Washington, D.C., April 2005
Click on the photos to enlarge them.
More information about this meeting

As a result of these activities, the IACHR in 2007 published the report Access to Justice for Women Victims of Violence in the Americas. It examines the primary obstacles women face when they seek to avail themselves of judicial remedies with proper guarantees, and presents conclusions and recommendations for the States to act with due diligence to offer an effective judicial remedy to incidents involving violence against women. The report's analysis includes information sent to the IACHR by various sectors, including the judicial branch, government officials and representatives, civil society, the academic sector, and women of different races, ethnicities, and socioeconomic groups, as part of a research project the Office of the Rapporteur undertook with financial support from the government of Finland.

In May 2011, the IACHR published a questionnaire on the situation of access to justice for women victims of sexual violence in Mesoamerica. This project forms part of the activities of the Rapporteurship on the Rights of Women and it is conducted with UNFPA.

The questionnaire is subregional and was prepared as part of the implementation of the project on the situation of access to justice for women victims of sexual violence in Mesoamerica (Mexico and Central America), with a special emphasis in Guatemala, Honduras, El Salvador and Nicaragua. The objective is to elaborate a diagnosis of the main achievements and challenges of the States regarding the judicial response to complaints and cases of sexual violence.

The information received through this questionnaire will be used, along with other sources, for the elaboration of a IACHR-UNFPA thematic report. The questionnaire has been sent to the OAS Member States, civil society organizations, international agencies and experts in the topic, and it has been posted on the Website of the Commission to receive responses from any interested party.

The questionnaire is available only in Spanish

In 2005 and 2006, with financial support from the government of Finland, the IACHR Office of the Rapporteur on the Rights of Women carried out a series of information-gathering activities in order to obtain a complete overview of the main challenges women victims of violence face when they seek to avail themselves of adequate and effective legal remedies. As part of this process, the Office of the Rapporteur organized five regional and subregional meetings of experts in Washington, D.C. (April 19-20, 2005), Peru (August 1-2, 2005), Costa Rica (August 11-12, 2005), Argentina (September 12-13, 2005), and Jamaica (September 29-30, 2005). The subregional workshops were organized in collaboration with the following entities, which work to protect the rights of women in the Americas and their right to live free of violence: the Legal Defense Institute (Peru); the Latin American Justice and Gender Team and the Center for Legal and Social Studies (Argentina); the Inter-American Institute of Human Rights (Costa Rica); and the United Nations Development Fund for Women (Jamaica).

During the meetings, which brought together some 130 experts, the participants explored in depth the subject of access to justice from different points of view. Topics included violence against women and discrimination; discrimination against women in the judicial branch; findings and lessons learned from studies of the subject; the degree of impact of international and regional legal instruments; the need for an approach across different sectors to bring about effective, genuine access; and the use of the inter-American system. Barriers to adequate judicial protection were identified and analyzed—institutional, budgetary, geographical, cultural, linguistic, and economic barriers—as well as comprehensive and multidisciplinary strategies to eliminate them. The participants also identified specific recommendations that the IACHR and the Office of the Rapporteur can make to the OAS Member States on how to address ongoing challenges.

In 2005, the IACHR circulated a questionnaire to the OAS Member States, civil society experts, international bodies, and the academic sector, in order to gather information on the main achievements and challenges regarding women's access to justice in the Americas. The information gathered was analyzed in the report Access to Justice for Women Victims of Violence in the Americas.

The Office of the Rapporteur also received information and documentation related to the questionnaire from a series of organizations and experts in the subject. Among those contributing to this effort were entities of the inter-American system, such as the Inter-American Commission of Women (CIM) and the Justice Studies Center for the Americas (CEJA). Information was also received from Zarella Villanueva Monge, Magistrate of Costa Rica’s Supreme Court of Justice; Emilse Ardaya, Minister of the Supreme Court of Justice in Civil Matters in Bolivia; and María Cristina Hurtado, Delegate Defender for Children, Women, and Youth in Colombia.

On March 7, 2007, the IACHR made public its report Access to Justice for Women Victims of Violence in the Americas, prepared by the Office of the Rapporteur. The report seeks to offer an overview of the main obstacles women face when they seek to avail themselves of judicial remedies, guarantees, and protections to redress acts of violence, including the problem of impunity. The report draws conclusions and makes recommendations to help the States act with the necessary due diligence to provide an effective and timely judicial response to these incidents. This report’s analysis is based on a process in which information was gathered from a variety of sectors, including the judicial branch, government officials and representatives, civil society, the academic sector, and women of different races, ethnicities, and socioeconomic conditions. The process was carried out by the Office of the Rapporteur with financial support from the government of Finland.

Photos of the event held in Colombia to present the Access to Justice report.
Click on the photos to enlarge them.

The report concludes that even though the States have formally and legally recognized that violence against women is a priority challenge, the judicial response has fallen far short of the severity and prevalence of the problem. While the Commission recognizes the States' efforts in adopting a legal and political framework to address violence against women, an enormous gap remains between the formal availability of certain remedies and their effective application. This situation not only fosters a sense of insecurity, defenselessness, and mistrust in the judicial branch on the part of victims, but in this context of impunity it also perpetuates violence against women as an accepted fact in American societies, to the detriment of women's human rights. In this report, the Commission lays out conclusions and recommendations designed to help the States act with due diligence to offer an effective and timely legal response to acts of violence against women.

The Commission presented its Access to Justice report on March 7, 2007, in Washington, D.C., with the participation of José Miguel Insulza, Secretary General of the Organization of American States (OAS); Commissioner Víctor Abramovich, Second Vice-Chair of the Commission and IACHR Rapporteur on the Rights of Women; Teresa Genta-Fons, Principal Adviser for Latin America and the Caribbean in the World Bank’s Legal Division; and Marianne Mollmann, Advocacy Director in the Women’s Rights Division of Human Rights Watch.

In March and April 2007, following the publication of the report Access to Justice for Women Victims of Violence in the Americas, national-circulation newspapers in several countries of the region published an opinion piece signed by the then IACHR Rapporteur on the Rights of Women, Commissioner Víctor Abramovich. 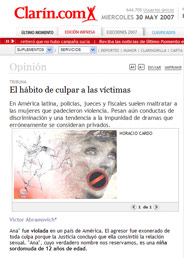