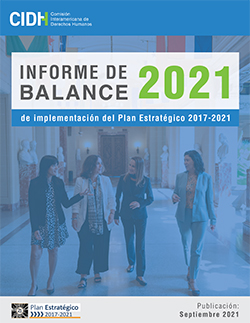 Washington, D.C. — The Inter-American Commission on Human Rights (IACHR) presented its six-month progress report for the fifth year of the Strategic Plan 2017–2021, which included an overview of the main results for the goals of the 21 programs set out in this. This progress report is to increase the transparency of the IACHR's work and its accountability to the international human rights community, with a focus on the following areas: reducing procedural backlog; strategic, integrated, coordinated monitoring; and dialogue, cooperation, and coordination with different stakeholders

The IACHR highlighted the progress it has made on overcoming procedural backlog and progressively developing international human rights law to consolidate inter-American human rights standards. In 2021, the IACHR prioritized all cases at the merits stage dating to before 2001 and those at the admissibility stage dating to before 2014, as well as petitions and cases that develop standards on the IACHR's priority issues, which are the focus of the offices of its special rapporteurs. In the first six months of 2021, the IACHR received 1,126 petitions, 886 of which have been evaluated. Of the total number of petitions, it was decided that 177 would be processed; 581 would not be processed; and additional information would be requested regarding 128. Furthermore, 115 admissibility reports and 23 merits reports were approved.

The IACHR submitted 26 cases to the jurisdiction of the Inter-American Court of Human Rights (IA Court), which will rule on States' responsibilities and assign reparations in favor of victims, where appropriate. The cases in question include serious human rights violations such as extrajudicial executions, torture, and forced disappearance. Some of these cases will allow jurisprudence to be developed on highly relevant issues such as judicial independence, the duty to investigate medical malpractice with a gender perspective, the prevention and investigation of acts of terrorism, the right to judicial protection against discriminatory acts based on sexual orientation or disability, the right to participate in government on equal grounds, the permissible restrictions on personal freedom, and the compatibility of legal concepts such as arraigo or life imprisonment.

Requests for precautionary measures continue to be reviewed in real time: in the first half of 2021, 587 requests were received, 566 of which are at the initial evaluation stage, while 25 have been granted.

The IACHR continued its work on the strategic, integrated, coordinated monitoring that enables it to respond effectively and immediately to human rights situations that may arise in various countries in the region. In the first half of 2021, it carried out a historic working visit to Colombia to verify the situation on the ground in the context of the social protests that began in April 2021. It then presented the State with its observations and recommendations. The IACHR also paid virtual working visits to the Dominican Republic and Mexico to address the situation of violence and discrimination against women, girls, and adolescents and the situation of people in movement.

Certain trends in human rights in the Americas were also identified: a weakening of democratic institutions; issues relating to the independence of the branches of government and human rights institutions; high levels of inequality and discrimination; the militarization of civilian services; high levels of impunity and corruption, including increased communication between organized crime and State structures; the disproportionate use of force during social protests; the differentiated impact of COVID-19 on people in particular situations of risk; and humanitarian and migration crises. The IACHR responded by issuing press releases and statements on its social media accounts.

The following reports were approved and published: a country report on the human rights situation in Brazil, a report on the economic, social, cultural, and environmental rights of people of African descent, and guides on the internet and human rights; migration, family unity, and reunification during pandemics, risk mitigation for human rights defenders, and compendiums on memory, truth, justice, internal regulations, and inter-American standards.

As part of a joint effort with the Office of the Rapporteur for Economic, Social, Cultural, and Environmental Rights (OSRESCER), the IACHR approved Resolution 1/21 on COVID-19 vaccines in the framework of inter-American human rights obligations, which contains important strategic recommendations for States regarding implementing vaccination processes with strict respect for human rights.

The Office of the Special Rapporteur for Freedom of Expression (RFOE) focused particularly on issues concerning the exercise of freedom of expression online, and threats and attacks on journalists in the Americas. The RFOE has continued work on its three-year plan, which it developed in consultation with various stakeholders, including member states, donors, civil society, and academic establishments in the region.

Since the start of the COVID-19 pandemic, the IACHR has adopted new ways of working and collaborating with States and civil society organizations in the Americas. In the first half of 2021, it held its 179th and 180th Periods of Sessions, which included a total of 42 public hearings on thematic issues, cases, and precautionary measures. In keeping with its advisory role before the political bodies of the OAS, it made a total of 28 appearances before the Permanent Council, the Committee on Juridical and Political Affairs, the Secretariat of the Summit of the Americas, and the LGBTI Core Group. In this sense, with a view to deepening dialogue with States, meetings were held with various regional groups during the Periods of Sessions, including with States in South America and Mexico, Central America and the Dominican Republic, Canada and the United States, and CARICOM, and with Permanent Observers and 36 bilateral meetings with various States.

As part of the IACHR's collaboration with the United Nations human rights system, regional and subregional human rights bodies, and the Inter-American Court of Human Rights, statements, press releases, and other joint documents were drafted on various topics to contribute to promoting and defending human rights in the region, engaging in joint coordination and strategic efforts. As part of this process of promoting and defending human rights, 62 promotional activities were carried out with strategic actors to promote capacity-building on human rights issues and the implementation of inter-American standards at the national and local levels.

The IACHR has also been redoubling its efforts to ensure it has the human resources, infrastructure, technology, and budget needed to carry out its mandates and functions in full, based on results-based management for effective institutional development, committed to human rights and justice and reparations for victims of human rights violations. To that end, the IACHR continued pursuing the open-door policy and the Cuidar Cuidando program.

It also wishes to thank the OAS Member States, Permanent Observers, and institutions for their voluntary contributions in the first half of 2021, which have played a decisive role in achieving the outcomes presented in this publication: Canada, Costa Rica, France, Ireland, Mexico, Norway, Panama, Spain, Sweden, Switzerland, the United States, the Ford Foundation, the Open Society Foundation, the Pan American Development Foundation, and the Office of the United Nations High Commissioner for Refugees.

A principal, autonomous body of the Organization of American States (OAS), the IACHR derives its mandate from the OAS Charter and the American Convention on Human Rights. The Inter-American Commission on Human Rights is an autonomous organ of the Organization of American States whose principal functions are to promote the observance and defense of human rights and to serve as an advisory body to the Organization in this area. The Commission is composed of seven independent members who are elected in an individual capacity by the OAS General Assembly and who do not represent their countries of origin or residence.